The idea to give something special to my pupils and our territory with a clinic and a show of “Tuck & Patti” marked the beginning of a wonderful experience. Even when it is actually over, it will continue through the indelible memories and precious advice they have given us all life long. Skipping all the organizational hard work, I’d like to start from the telephone call I received when they arrived in Pordenone: “Hi, Francesco. I’m Tuck Andress of Tuck & Patti and we are arrived! Would you like to have dinner with us?” The memory of my first meeting at the hotel is still vivid in my mind. I was impatiently staring at the stairs leading up to the rooms, looking forward to seeing my idols “live”. There they were: he was casually dressed while she was elegant as always. They made me feel at my ease by accepting to visit the school and appreciating the simple view of a small church, typical of Pordenone (Patti still remembers that place and she even dreamt of it). I spent a memorable evening, sipping sparkling wine and chatting like old friends who hadn’t seen each other for a long time. Then, we went to bed early because of the following day’s schedule (the clinic and the show).

The clinic and the show

The opportunity to see Tuck Andress as guest musician had already caused incredible impatience and curiosity the days before the clinic. So, his entrance was surrounded by a strange, almost surreal atmosphere – as if a Martian had landed at the Play School of Music. After Patti carried out a short sound check, with no warming up, he played “I wish” just to break the ice. Tuck decided to start with one of his favorite pieces of virtuosity. It actually gave him the opportunity to show all the difficulties he had run – and he is still running, according to him (even if it doesn’t sound like that at all) – as polyphonic guitarist. He showed every single passage necessary to completely master the piece of music in the first place and then to treat it freely. Among his various suggestions, he highlighted the importance to play the melody in various registers, exploring every single possibility offered by the instrument. The same applies also to the bass line and the comping until an optimal solution is found that combines everything together. His suggestions always give one the freedom to personalize and adapt to themselves. His clinic lasted for more than two hours during which he dealt with themes regarding both guitar solo and guitar accompaniment pieces. The latter implies that the guitarist has to deal with the technical problems and limits presented by the instrument. He played a lot while also improvising experiments on the spot. He is a complete guitarist: from the use of the flat to the imitation of it with his fingers. He actually plucks the strings in a variety of different ways, but always with his fingertips only (with no long nails on the right hand), from the artificial harmonics to the backbeat and all the possible, even the most hidden percussions. The afternoon ended, but not without an encore: “Up and at it” by Wes Montgomery. The audience was overwhelmed with astonishment once again, while everyone became aware of the fact that they had to decide whether to change their jobs or go back home and study. The following day’s concert – sold out two weeks before it took place – was the best chance to understand the full potential of this duo. They started with “Learning how to fly”. The sound was perfect – watching them working during the sound check proved once again how complete these two artists are and how perfectly they match each other and their equipment together with the service at their disposal. It sounded like a disc whose list of songs was decided on the spot with a simple knowing look or breathe. Patti overwhelmed the audience with her irrepressible emotional energy, her amazing kindness and her wonderful phrasings. Tuck’s hands caught everyone’s attention while performing such acrobatic acts that did not make one regret the absence of an orchestra. As a matter of fact, it sounded as if an orchestra had materialized, especially when Patti left the stage and Tuck performed two masterpieces of the guitar arrangement: “Man in The Mirror” and “Europa”. They provoked a general ovation as well as discouragement in many guitarists present due to his mastery. After Patti went back on the stage, the concert came to an end with the unfailing and contagious “Time after time” and a number of encores. After a short break, the two artists patiently stuck around with fans for pictures, autographs and stories.

The adventure of the Just Duet

It would take too much time to tell you about every extraordinary and funny step which has led us to our cooperation with the U.S. duet (maybe one day I will write a book on it). I will try however to share some of the memorable moments which are contributing to my professional and personal growth. That luckiest and most unexpected musical encounter suddenly made us devote every single moment to my first CD which was to be mixed with Tuck and Patti as well as to the organization of my trip to the wonderful West Coast in California. When we decided the date of our arrival, Tuck and Patti had already organized everything. They were “simply” worried about what our favorite food and drinks were and e-mailed us some videos (made by them) to let us choose the accommodation we liked most in the neighboring Cottage Inn. After a million of preparations and recording tests, the date for the long but exciting oversea flight came. After the landing in the U.S., we were awaited outside the gate by Tuck Andress while Patti played the unusual but funny role of our driver. After a first cup of coffee to fight the jet leg, we went immediately to their place (where I dropped a cheesecake, caught in the excitement). It was the first time we had been in the place of someone famous. Except in our dreams! When you meet worldwide-known celebrities, you always expect to see incredible things, as if you were living in a parallel world where nothing is daily routine, where time has stopped in a timeless present of satisfaction and returns. It’s not like that at all! We found out that life is the same for everybody, instead. To reach increasingly higher targets, you have basically to constantly commit yourself. The good thing is that in Tuck and Patti’s place, you don’t feel like a guest but rather as part of their lives. That makes you learn from their experience more quickly and in a very emotional way. The days I spent with them passed by very quickly. That is exactly what happens when you feel good. It was as if I had learnt in ten days what you would normally learn in two years (if you are lucky): a full immersion into the music and the lives of two real artists. The work was organized very precisely and zealously. Our motto was always “fresh ears”. You can’t work when you are tired, these things require the highest attention. Mixing a CD is no small feat. So Patti turned from perfect producer into perfect travel guide through the streets of San Francisco, while Tuck stayed in the studio phoning us now and then to make sure we were having fun. I was impressed by so much attention and constant engagement in our project from two people who have written and are still writing a chapter in the history of music. That’s the only thing that links us to the dreams we were talking about before. Tuck and Patti didn’t impose anything upon us. They elegantly knew how to make us think in order to take the best decision. Nothing was left to the chance, every single variation in dB was considered thoroughly so that we all agreed on the decision taken. We listened to the same parts of pieces dozens of times, because this is how something serious and valid is made. We carefully considered together which effects might make the qualities of our music stand out best, also thanks to the wide choice offered by their studio. Tuck told us he had sometimes taken advantage when Patti was half asleep to propose her to buy some high-quality and therefore very expensive equipment. Her answer being a dozing “OK”, he immediately ordered it online. So, among serious and weighed investments and “white lies”, the equipment grew more and more until it has become a jewel of technology and an attraction for musicians. All the equipment was at our disposal and I was left dumbfounded in front of the famous Gibson L-5. So, Tuck gave it to me – just like one does with a friend – and offered me the chance to play a piece in the history of sound recording while Patti chorused Laura’s voice with sublime – improvised – melodies. That incredible experience inspired also new pieces among which “Stop the time” which might unconsciously be a metaphor of our small, but at the same time big story. I can say that Tuck and Patti are like a second home, they are friends, brother and sister and (please don’t get us wrong) parents at the same time. As a matter of fact, when we came back late at night, Patti gave us a nice scolding by saying “Kids! It’s bed time” and we didn’t understand. Maybe because we already felt like we were asleep: everything around us seemed like a dream. 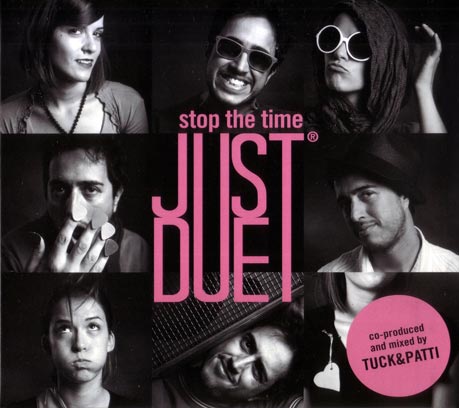 Envelope
If you want to make donations for supporting my projects, they will be very appreciated
Paypal